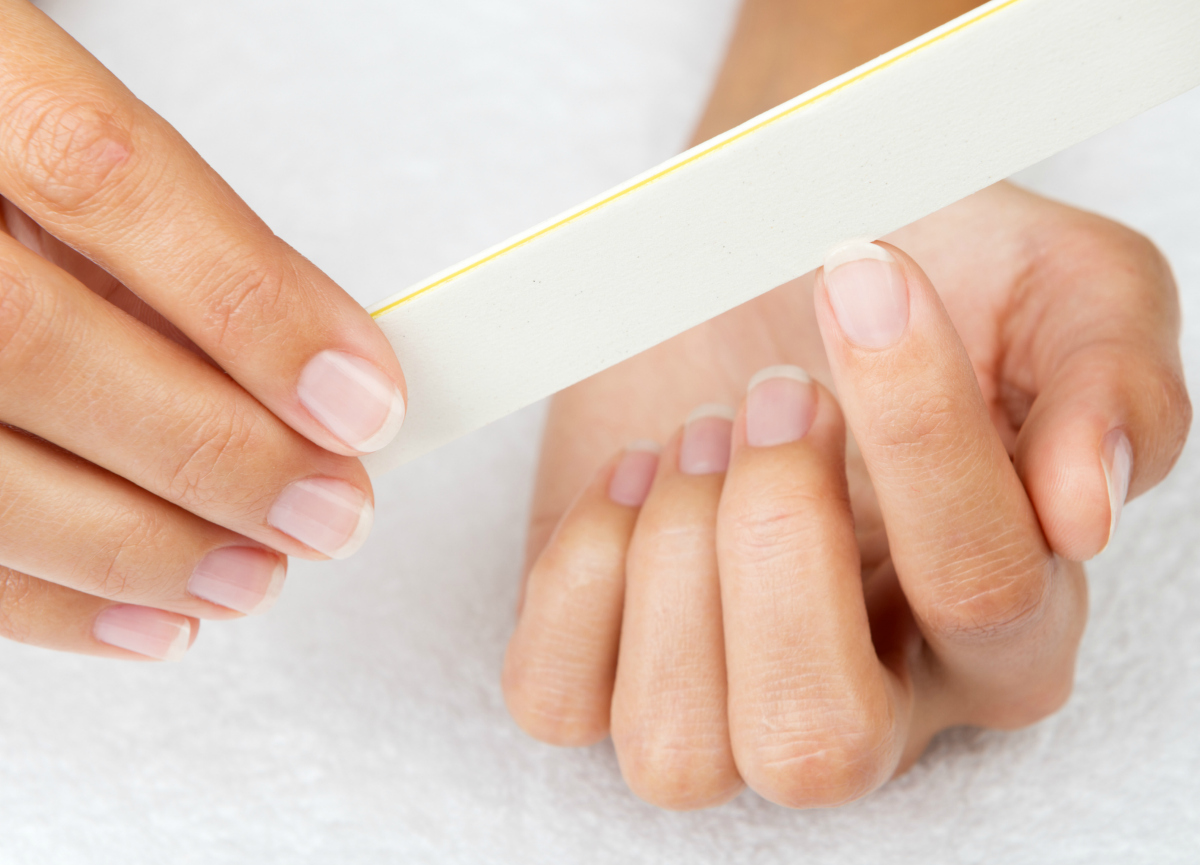 Getting a manicure is supposed to be relaxing, but few things in life equal the rage you feel when you smudge your freshly painted nails before you've even walked out salon door. And if you do manage to avoid chipping them right off the bat, the polish still looks a little worn for wear by the end of the week.

These nail polish pains have caused many in the fashion and beauty world to embrace the "no-mani mani." This seemingly magical technique eschews chemical polishes in favor of celebrating nails' natural beauty and shine through moisturizing, filing and buffing. While the no-mani mani doesn't require a trip to your nail salon, there's still a little maintenance required. Just like "no-makeup makeup" look, the anti-manicure involves some careful prep. The benefits are worth it, though, as you'll be able to flaunt your hands without worrying typing, door-opening and dish-washing will decimate your nail look.

Follow these tips to master the refined no-mani manicure:

The first step of the no-mani is intensely hydrating hands. This can be done by soaking hands in a small bowl filled with warm whole milk. According to MarthaStewart.com, the lactic acid in milk helps soften skin and remove dead skin cells. You can also slather on a rich, nourishing oil or moisturizer like the ELEMIS Pro-Radiance Hand & Nail Cream.

It seems like cutting your cuticles is an intrinsic rule of nail care that was mysteriously passed down from generation to generation of manicure gurus. However, snipping your cuticles is actually pretty bad for your nails and overall health. Those little pieces of skin are there for a reason.
"It's a health risk because you're basically giving yourself open cuts on your fingers, which have a huge potential for getting infected," said nail artist Simcha Whitehill, also known as Miss Pop, in an interview with Popsugar.

Furthermore, cutting your cuticles can cause them to grow back even more scraggly. Instead, gently push back cuticles with an orange stick after soaking or moisturizing hands. Alternatively, you could also just leave your cuticles as is.

The next step of the no-main mani is filing your nails, but chances are, you're probably committing another nail no-no that's making your digits look a little worse for wear. You should only file your nails in one direction, not side-to-side, because the back-and-forth motion weakens nails and can cause them to split or flake. Also, the shape of your nails affects their overall health. MarthaStewart.com recommended filing nails into squares with rounded corners, since this shape is more crack-resistant.

The most important step of the no-mani mani is the buffing stage. This gives nails their shine and luster, without having to use polish. Vogue advised investing in a four-sided block buffer to do the job. The buffing levels start out rough to prep nails and then deliver a smooth finish. Follow the steps from 1-4, however, the source noted that you should not buff with the most abrasive side more than once a week.

Seal with a moisture kiss

After you've buffed nails, massage a nutrient-filled cuticle cream or oil into each nail. This will add a final boost of shine and vitality to your no-mani mani.

While the no-mani mani lasts longer than a full-on regular manicure, you still should take preventative measures to keep your hands in top-top shape. Wear gloves when you do the dishes and wash hands with lukewarm, not hot water, immediately following with lotion. Slathering on moisturizer and then sleeping with gloves on a few nights a week will help your hands to keep wowing, too.