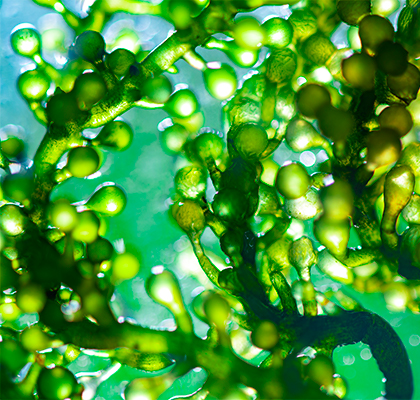 The earth's natural wonders hold true beauty and is home to environments that have flourished for hundreds of years. It's no wonder that it has healing and skin-enhancing properties, but what deep secrets do we not know about? Here are some skin-friendly ingredients we're ready to bring to the surface.
PADINA PAVONICA
Padina Pavonica is a brown algae that can be found on the Mediterranean coast that is a boost to your skincare routine. Try saying Padina Pavonica quickly ten times. Classic tongue twister, right? This rare ingredient combats loss of skin elasticity that can be caused by lack of sleep or by daily facial movements. Cue the Padina - our skin-firming friend. Discovered at the site of a shipwreck, this algae holds ingredients that fight the effects of aging on your skin and can be used daily by adding ELEMIS Pro-Collagen Marine Cream to your morning routine.
CHLORELLA
When it’s raining cats and dogs, and sometimes free radicals, we suggest a chlorella umbrella. What is chlorella and how can it act as an umbrella? The antioxidant-dense chlorella is an algae that grows in freshwater and its extract can fight the effects of free radicals that age your skin. It also contains proteins, fibers, vitamin B12, and enhances aerobic endurance when included in your diet.
GINKGO BILOBA
Was it Bingo, or Ginkgo that was his name-o? Ginkgo Biloba, another ingredient in the ELEMIS Pro-Collagen Marine Cream, is the name of the dried green leaf extract that comes from the native Southeast Asian tree itself. The species has been around for 270 million years making it one of the oldest trees on earth. NCBI reports the species has been around for so long because of its resistance to environmental stress. So Ginkgo, how do you do it? Well, its high concentration of antioxidants gives it the ability to lower levels of oxidative stress. Oxidative stress, an imbalance of free radicals and antioxidants, can lead to diseases like cancer and heart disease. This key ingredient increases skin moisture retention and reduces roughness within two weeks. To boot, Medical News Today reports that Ginkgo supplements in your diet deliver a variety of benefits including enhanced eye health, memory and cardiovascular function. This is something we want to plant our roots into!

Click here to take your skincare routine to the next level.